Trix’ Travels was created with full cooperation of Trix the cat. She has been perfectly safe and lazy during the entire process that will now be posted every other Saturday. This weeks stop: The Bahamas. 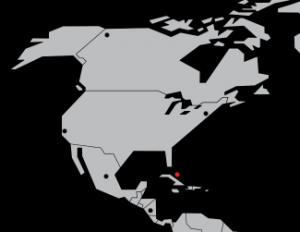 So my owner decided to send a picture of her on the beach. Like we should be jealous or something. Where we are right now, everything is one giant beach, a giant litterbox surrounded by water. The humans seem to have invented a mode of transportation for this area, they move around on weird flat boards that they move across the waves. The blond human also likes it, she spends most of her time in the ocean. Although, yesterday she did not dare to go into the water as there were some sharks seen not too far from the coast. Apparantly, the human is terrified of sharks, which I think of as being just oversized fish but I might be wrong. When my travel companion showed me some pictures, they didn’t look like fish but more like a giant swimming set of teeth. I don’t share her fear but I think I can understand it.

As we are not used to these seas, I’m not used to any seas really, the human signed us up for swimming-on-weird-boards-lessons. It was fun to let all the waves do the work for us, but the humans enjoyed it a lot more than I did. When there were no waves, the blond one used one of the boards to let me float around while she swimmed and pushed me to see more of the island. It was quite enjoyable, but not as much as lying in the warm sand during the evening and looking at the stars. I tried to catch some insects that looked like flying specks of light, but they were too quick and also too beautiful to look at. It seemed like a waste to squash them with my paws.

Aah, the human is calling me. It seems like they are serving the first pieces of chicken from the barbecue. I do like barbecue…

Trix in the Amazon