Trix’ Travels was created with full cooperation of Trix the cat. She has been perfectly safe and lazy during the entire process that will now be posted every other Saturday. This weeks stop: New Zealand. 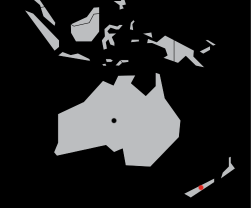 While we were flying from Australia to New Zealand, the human made me watch these films called The Hobbit, and I love them! All these little creatures, so much food, a lot of adventure. It sounds a bit like our own travels at the moment. Although I’m quite happy we don’t seem to encounter dragons. I’m not particularly good at riddles. Watching the movies did change my image of New Zealand a bit, and to be really honest the country is only half as cool as the films make it look. I have never enjoyed movies before, I don’t really understand the moving pictures all that much, but I liked these. Maybe because they’re so absurd, or maybe because we can visit many of the places where they shot scenes from the films because we are visiting the country.

New Zealand is a bit colder than I expected. I thought it would be like a tiny Australia, but it is not like the other island at all! The temperature here is nicer, and it is a lot greener. There are also no annoying kangaroos, but instead they have these awesome birds called kiwi’s (like the fruit, only with legs and a beak). They tell the most funny stories! I tell them to the human the next morning but I don’t think she really understands me, and the kiwi’s seem a bit afraid of her because they hide during the day. They told me they are the little (really little) brothers of this giant bird called ‘the elephant bird’ that used to live in Africa. It seems strange to me, because we are nowhere near Africa and this elephant bird could have squashed the kiwi’s without even noticing it stepped on something. But if that is what they want to believe, who am I to disagree? I wonder if there are any kiwi’s in The Hobbit? Maybe I didn’t look hard enough. They seem strange enough to live in Middle Earth…