Trix’ Travels was created with full cooperation of Trix the cat. She has been perfectly safe and lazy during the entire process that will now be posted every other Saturday. This weeks stop: Nicaragua. 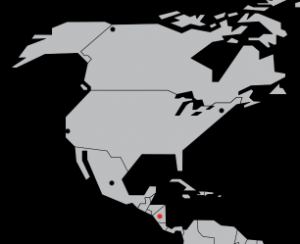 We have traveled half the world by now, which is a bit of a confusing thought. I always thought the world was bigger, a lot bigger, and traveling it would take years. But because of modern transport it is only taking us several months, which is a rather odd idea.

As we are traveling the entire world, meeting new people, seeing different cultures, and eating a lot of strange (but often yummy) food, I started wondering about the people who lived in these countries in the past. Were they different from modern humans? I know that the ancient people of Egypt, where we were not too long ago, used to honour cats but they don’t do that anymore. And I also know that they used to build castles in Europe, but those aren’t made anymore either. So humans must have changed over time. Normally I wouldn’t even bother to think about such things, but now they are starting to fascinate me although I am not quite sure why.
But because I was wondering about the ancient peoples of the world, I wondered if we could go to even more museums like when we went to the huge building where lions used to fight in Rome, or that really old buidling in Istanbul, or even live in the ancient style of the people as we did while traveling by dog sled in Canada.

I think the human is getting better at understanding me, because she took me to a site where a lot of people were digging in the dirt. At first I thought she misunderstood me, that she thought I had to go to the bathroom, but then she explained to me that these people were archaeologists that were connected to the same university as where she studied. And that they were trying to dig up remains of the ancient peoples of this land. It sounded really cool and fascinating and I wanted to help, but I also don’t really like to get my paws dirty. So in the end I just acted as their new mascot, but that is okay. Dogs are made for working, cats are made for looking good and being worshipped.

Trix in The Bahamas