Trix’ Travels was created with full cooperation of Trix the cat. She has been perfectly safe and lazy during the entire process that will now be posted every other Saturday. This weeks stop: Japan. 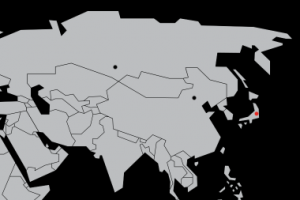 Aah, this is living… Polite people, great views, a lovely hotel, no traveling, a nice hot bath to wash all the dust out of my fur, and plenty of fish to nibble on. I like this country. The human was a bit sad that she missed someone called Sakura, I have no clue who that may be but she sounded real nice and pretty, but I think the moping is now melting away in this nice hot water.

The Japanese know exactly how to relax and how to treat guests. When we arrived here, we got nice robes, a quite room where we can sleep, read, and relax, and they immediately offered us some refreshing drinks and a lovely lunch. The Japanese are a bit quiet, but I don’t mind that after all the large cities and loud countries that we just visited. I like this serenity, it leaves room for some contemplation, or just to stare at an interesting speck of dust. I missed doing that, I haven’t done that nearly enough in the last few months.

It seems that the Japanese understand my way of thinking. They have these weird gardens, that they often just sit in or stare at for hours before they change one tiny thing. I love this. I like sitting next to them and watch the gardens with them. My travel companion sometimes joins us, and sometimes she doesn’t because she’s out exploring the landscape surrounding our lovely retreat. I would like to stay here but I cannot, the garden told me so.
It was a strange phenomenon, but one of the men who tend the garden talked to me about it. I really did hear a voice coming from one of the rocks. It spoke to me in a language I did not understand, but it made me feel very calm although I was annoyed earlier that we would do more traveling after this. I did understand what it meant to say, that I would have to travel on with the blond crazy human and that she would protect me. And that I would return to my own humans afterwards. The old man explained to me that it was a kami that spoke to me, a nature-spirit. I think that is similar to the jaguar I saw, but I’m not sure. I also don’t know how the old man knew that the rock had talked to me, and that that confused me. I don’t think I really understand the world, or at least several things in it.

Trix’ Travels was once created with full cooperation of Trix the cat. She has been perfectly safe and lazy during the entire process that was posted every other Saturday. This project has long been finished, but now has a final ending. Trix […]