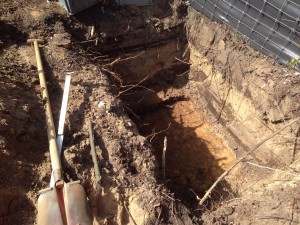 “Lost two people, rations are running low.”
Probably every archaeologist in the field has felt like saying that at least once in his/her career. When slashing and climbing through dense forest, trying to find the location you should work at, you might feel as if you are in the jungle. You are not though, it is just a forest. With vipers, some lost scorpions, and several freaky looking spiders, but there are no boa constrictors here. Or alligators. Or venomous whatevers that could kill you. Also no monkeys or brightly coloured birds. Just rocks, bugs (lots of bugs), and archaeologists.
“We can lose a student, that is fine. As long as we keep the DGPS.” It feels nice to know that they appreciate you more than the equipment. Although that equipment might cost more than a broken leg. Therefore it is compulsory to carry the brightly coloured backpack on your stomach, as if it is a newborn and defenseless infant. Who’s idea was it to take this thing up the mountain?

Sweat is dripping down our faces, clothes are sticking to peoples backs, and the DGPS has switched carriers three times already. It is a bit of a burden, making movement between the trees more difficult. Time after time we are reminded not to run, and to take small steps. This is easier said than done, especially for the smaller members of the group. Suddenly, a loud scream fills the air. Heads rise in alarm, only to see someone do the weirdest dance possible. A spider decided that the collar of his shirt seemed very comfortable. Unfortunately for the spider, the honoured human is extremely ticklish. After some jumping and shaking, the backpack is hoisted up again and the fate of the spider remains unknown… One of the leading archaeologist snickers and looks at us with a huge grin on his face. “Statistically speaking, there is a really high chance that one of you will die here. We have a 10% marge when it comes to that.” He says, only one second before someone slips on the wet leaves. It almost ends in a slide down the mountain, if it was not for that tree that blocked that way down. The life of an archaeologist is not for the faint-hearted (or arachnophobia).

Did something just move in that bush…?