Trix’ Travels was created with full cooperation of Trix the cat. She has been perfectly safe and lazy during the entire process that will now be posted every other Saturday. This weeks stop: The Amazon. 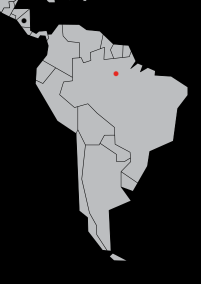 And I thought we had seen it all… Deserts, cities, people, beaches, the sea, the only thing missing were mountains. Or so I thought, and than the blond human dragged me to the biggest forest I have ever seen. It is a giant maze made out of trees. I do wonder how my brethren walk among here, how they don’t get lost. Yesterday I saw one that looked like a really big version of myself. A fur completely black, but when a bit of sun hit her side I could see that it wasn’t really black just extremly dark brown.
She was so beautiful, but I only caught a glimpse and before I could even warn the humans she was gone again.

I thought that I had made her up, that I didn’t really see her. But last night I couldn’t sleep because of the loud snoring of our guides so I stayed outside for a while. I like looking at the stars, which you can only see here when you are right next to the river. The light of the fire didn’t bother me, it wasn’t interfering with my stargazing so I left it on.
It took a while until I heard her, she was right next to me already and almost gave me a heartattack when she sat herself next to me. I had no idea cats could be so quiet! I wanted to become mad at her, tell her how rude it is to sneak up on people (or cats), but she looked at the stars and did not really seem to notice me. It was almost as if she wasn’t sitting next to me at all, the light around her was way too dim to be from the fire.

Maybe it should have scared me, but when she finally spoke I could not help but to feel really calm. Her voice was soothing, like the sound of rain or the wind in the trees. It was the sound of nature itself, and the language that she spoke felt ancient, as old as time and loaded with power. She told me that people used to worship her, used to see her as ruler of the night and the dark. She was a god, a deity no one was supposed to mess with, a symbol of power and kingship. She carried many names, such as Tepeyollotl and Ix Chel. But now, mankind seems to have forgotten her, forgotten how much she has done for them. She bides her time, waiting to show herself to the humans once more. I don’t know why, but it seems that night was not the night because when the sun rose, she got up and disappeared in the forest once again.

I haven’t seen her since. Too bad, I liked her.

Trix’ Travels was created with full cooperation of Trix the cat. She has been perfectly safe and lazy during the entire process that will now be posted every other Saturday. This weeks stop: Denmark. Okay, I knew humans were crazy, but they have […]